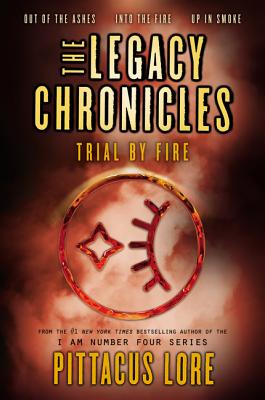 The perfect companion to Generation One and the #1 New York Times bestselling I Am Number Four series! Fan-favorite characters Six and Sam Goode return in this new saga, which is X-Files meets the X-Men.

In the aftermath of a thwarted alien invasion, teenagers across the globe have begun to develop incredible powers known as Legacies. While most are sent to the Human Garde Academy, countless others slip through the cracks—either by choice or by force.

Desperately wanting to help these lost teens, Six and Sam have joined a covert group tasked with investigating suspicious incidents that might be Legacy-related. The Legacy Chronicles companion series follows them on this mission, and this book collects the first three novellas. Originally published as digital originals, they are now together in one print volume for the first time ever.

In Legacy Chronicles #1: Out of the Ashes, Six and Sam’s first mission has them looking into a string of disappearances—but as they dig deeper, they stumble upon a treacherous Human Garde underworld.

In Legacy Chronicles #2: Into the Fire, Six, Sam, and their young allies infiltrate a new foe who is using powered teens for a deadly game.

In Legacy Chronicles #3: Up in Smoke, the couple is faced with dual threats after they’ve been split apart—and more than one life will hang in the balance.

Pittacus Lore is Lorien's ruling Elder. He has been on Earth preparing for the war that will decide Earth's fate. He finished recounting the story of the invasion of Earth in the I Am Number Four series and is now ready to tell another story. His whereabouts are unknown.

PRAISE FOR THE I AM NUMBER FOUR SERIES: “Number Four is a hero for this generation.”
— Michael Bay, director of Transformers

“I Am Number Four is a breathless page-turner. So gear up, sci-fi fans, the battle for Earth is on and there’s a new kid in town!”
— Amazon.com

“There’s genuine suspense…. It’s easy to get lost in the world of the sweet teen from another planet.”
— Chicago Tribune