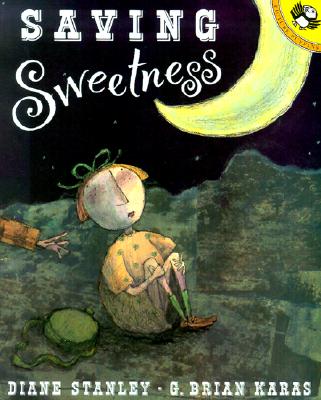 "A rip-roaring tale featuring a big-hearted sheriff, a high-spirited heroine, and a happily ever after ending, all told in the tongue-rattling twang of the Old West."--School Library Journal

Sweetness is the littlest orphan at mean, old Mrs. Sump's orphanage. When she escapes, Mrs. Sump sends the sheriff out to "rescue" her. But in the Wild West, with evil desperados about, it's the sheriff who ends up needing the help of Sweetness more than the other way around. . . .

"I have written about some of the world’s most interesting people—Cleopatra, Shakespeare, Shaka, and Joan of Arc, just to name a few. I chose them not only because they were important but also because their stories were dazzling. If I am fascinated, it stands to reason my readers will be, too.

"Before I begin a book, I do a lot of reading. You might think that one big, thick biography of my subject—say, six hundred pages—would provide more than enough facts for a book for children that will only be 48 pages long (and full of pictures). Why, then, do I read lots of those big, thick books? Because what I am looking for is not just facts—like when my character was born, what battles she fought or books he wrote (depending on the subject). I am looking, instead, for the big picture that eventually will emerge out of all those facts. I read book after book until I start to get a feel for the subject. I need a lot more information than I could ever use just to get to the point where I feel like I can truly tell the story.

"As I learn more and more about my subject, I begin to organize the book in my mind. There are always little extra things I feel I need to say, that end up at the front or back of the book. For Joan of Arc I had to tell my readers about the Hundred Years’ War and for Leonardo da Vinci I had to explain about the Renaissance. In Cleopatra, I had to make clear that her history was written by her enemies, almost a hundred years after her death. And in lots of the books, I add a little postscript to tell how things all turned out in the end.

"All historical figures come to us trailing myths. One of my jobs is to set the facts straight, to tell my reader when the myths are false (such as the fact that Cleopatra was neither Egyptian nor beautiful). If historians aren’t sure whether something actually happened or not, I tell my readers that, too.

"In writing about a famous person, such as Peter the Great or Queen Elizabeth, I need to tell more than just the facts of their lives. That is what I call the 'front story,' but there is also a 'back story' — think of it as the props and scenery of a play. Famous people from history lived their lives, after all, in a specific place and time — and Tsarist Russia (in the case of Peter) was altogether different from Renaissance England (in the case of Elizabeth). If the reader doesn’t have a feeling for the world my subject lived in, the story won’t really come to life.

"The final ingredient is the pictures and the design of the book. I think sometimes that I put as much research into the art as I do the text. Whether it’s a Florentine artist’s studio or an Alexandrian palace, I have to reconstruct it as carefully as I can. That goes for the appearance of my cast of characters and the costumes they wear, too. Even the food they eat, the carriages on the street, and the look of the landscape has to be researched. In the last few years, I have begun traveling to the location to do research. It’s pretty amazing, for example, to stand in the very house where Joan of Arc was born!

"I think history is fascinating. It is, after all, an account of the most important things that ever happened. And it’s all about people, too, amazing people. If I have done my job well, then my young readers will come to find it just as exciting as I do."

Diane Stanley was born in Abilene, Texas and grew up in New York, Texas and California. She studied to be a medical illustrator but changed her mind when she discovered children’s books through reading to her own children. She has been writing and illustrating them for over twenty years. She has two grown daughters, Catherine and Tamara, and a teenaged son, John. She lives in Houston, Texas with her husband and frequent collaborator, Peter Vennema.

She is also the author of Moe the Dog in Tropical Paradise and Woe is Moe (both Putnam), as well as a young adult novel, Time Out. She is beginning the research for a biography of Michelangelo.

copyright ? 2000 by Penguin Putnam Books for Young Readers. All rights reserved.
"My career in art had a humble beginning. I was in kindergarten. We had just finished a study on Native Americans. I was inspired. Our teacher gave us an unprecedented one whole week to create something of our own choice. At the end of the week we were to show her our creations. I immediately set out with an ambitious plan. A life sized three dimensional teepee. It didn't matter that I had never attempted 3-D before, I thought. I was wrong. I labored and sweated for the entire week over something I was unable to do and was too... something, afraid, proud?, to ask for help. At the end of the week, surrounded by truly awesome projects my classmates had constructed, when I had nothing to show for my week's worth of work, I hastily drew a three inch teepee on white paper and cut it out. Maybe she wouldn't notice its modest size I hoped. She did, and pointed out to the entire class how some people can manage to waste a great amount of time when others work so hard. I was crushed. Great intentions sometimes have sad endings.

"I resurrected my stature as a serious artist in the first grade. I drew caricatures. Mostly of my teacher who found them, and found them most unflattering. My classmates, however, thought they were brilliant. I had gained their respect. I had become 'the class artist'. Through my school years my projects began to improve in merit. I moved onto stage sets, snowflakes for holiday windows, and posters for the walls. I remember being very impressed with the artwork of Charles Schulz. I thought of the Peanuts characters as close friends, I liked their subtle humor. I managed to do a very good rendition of Schulz's work. And I enjoyed that more than anything I had done before. I also read a great deal and had an interest in writing. At one point I was selected to be part of a creative writing class in a different school system, an experience that freed my creativity in a way I hadn't known before.

"At home, sadly, I was not encouraged to pursue art as a profession. So I didn't take seriously the notion of being an artist until late into my senior year in high school. When it became clear that I had no clear direction to go in, I felt like I was adrift. I couldn't find anyplace where I fit. It was at that time I found a person who changed the course of my life, my art teacher. I enrolled in her art class. She took a special interest in me and my work. I think she saw that I had the talent but lacked the confidence and drive, and support, to apply to art schools. She encouraged me to apply to the school she had once taught in, and began to help me pull together a portfolio.

"I knew from the first day of art school that there was no other choice for me. This was it, a place where I fit. I had the good fortune of having many fine teachers, some of whom were working in the field of children's book publishing. In a way, there was never a question in my mind of what to do in the field of art. There was never a defining moment when I said, I want to be a children's book artist. I just was.I've illustrated over fifty books for children at the time of this writing, two of which I also wrote. I can still say that there is never a question of what I should do. This is what I do, and it comes very naturally to me. Not that I don't struggle with it or that it doesn't present a challenge, or that I can't continue to grow as an artist. Because I do, and it does, and I can. But what doesn't exist is a question of my purpose. Aside from watching my children grow, creating books for children is the most gratifying and worthwhile thing I can do."

G. Brian Karas was born in Milford, Connecticut. After graduating from Paier School of Art with highest honors, he worked s a greeting card artist at Hallmark Cards in Kansas City, Missouri. After three years he moved to New York and began freelancing as a commercial illustrator. His first illustrated book was published in 1983 (Home On The Bayou which won the Boston Globe-Horn Book Honor) and he has since illustrated more than fifty books for children. His first book as author-illustrator received a Boston Globe-Horn Book Honor in 1997. Saving Sweetness by Diane Stanley was a Capitol Choices Noteworthy Book for Children in 1996, received a Bulletin of the Center for Children's Books Blue Ribbon in 1996, and was a School Library Journal Best Book of 1996. Like Butter On Pancakes by Jonathan London was a School Library Journal Best Book of 1995. On The Trail With Miss Pace by Sharon Phillips Denslow was a Smithsonian Magazine Notable Children's Book of 1995. In 1995, I Know An Old Lady received a Parent's Choice Honor and was a 1996 Booklist Editors' Choice.