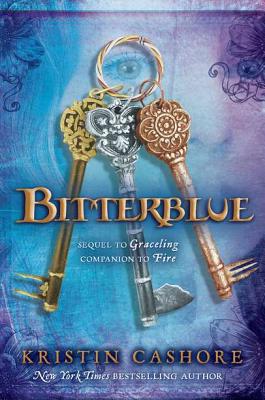 By Kristin Cashore
$19.99
Email or call for price.

“Cashore's third book is full of intrigue, conspiracies, and secrets. Queen Bitterblue's rule is shadowed by her father's legacy of pain, fear, and torture. Believing that the only way to restore her kingdom is to face the past, Bitterblue delves into forgotten histories, stories, and altered memories in her search for answers. Deliciously thrilling and full of twists and turns -- plus a little romance, of course!”
— Marika McCoola, Odyssey Bookshop, South Hadley, MA

The long-awaited companion to New York Times bestsellers Graceling and Fire
Eight years after Graceling, Bitterblue is now queen of Monsea. But the influence of her father, a violent psychopath with mind-altering abilities, lives on. Her advisors, who have run things since Leck died, believe in a forward-thinking plan: Pardon all who committed terrible acts under Leck's reign, and forget anything bad ever happened. But when Bitterblue begins sneaking outside the castle--disguised and alone--to walk the streets of her own city, she starts realizing that the kingdom has been under the thirty-five-year spell of a madman, and the only way to move forward is to revisit the past.
Two thieves, who only steal what has already been stolen, change her life forever. They hold a key to the truth of Leck's reign. And one of them, with an extreme skill called a Grace that he hasn't yet identified, holds a key to her heart.

Kristin Cashore grew up in the northeast Pennsylvania countryside as the second of four daughters. She received a bachelor's degree from Williams College and a master's from the Center for the Study of Children's Literature at Simmons College, and she has worked as a dog runner, a packer in a candy factory, an editorial assistant, a legal assistant, and a freelance writer. She has lived in many places (including Sydney, New York City, Boston, London, Austin, and Jacksonville, Florida), and she currently lives in the Boston area. Her epic fantasy novels set in the Graceling Realm--Graceling, Fire, and Bitterblue--have won many awards and much high praise, including picks as ALA Best Books for Young Adults, School Library Journal Best Book of the Year, Booklist Editors Choice, and Publishers Weekly Best Book of the Year. In addition, Graceling was shortlisted for the William C. Morris Debut Award and Fire is an Amelia Elizabeth Walden Book Award Winner."

"Some authors can tell a good story; some can write well. Cashore is one of the rare novelists who do both. Thrillingly imagined and beautifully executed, "Bitterblue" stands as a splendid contribution in long literary tradition."
-New York Times Book Review

"A story that transcends the genre with its emotional and philosophical weight."
-BCCB (starred review)

"Readers will gallop through [Bitterblue], eager to catch up on beloved characters and hopeful that the Seven Kingdoms can at last find peace. There are astonishing and sometimes heartbreaking discoveries...Buy all three volumes, in multiple copies."
-VOYA (starred review)