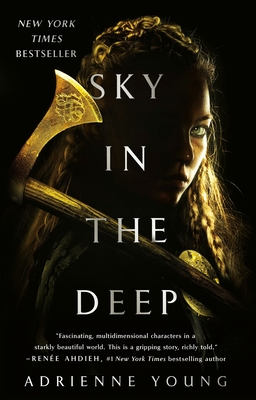 “Sky in the Deep is the YA fantasy I’ve been waiting for — a breath of fresh air that holds the reader captive from the opening scene. Be warned, you will fall hard for Eelyn and Fiske. You will swoon, you will gasp, you will laugh, and you will cry; this book touches on all the emotions. In a brutal, bloody world, Young pulls no punches when putting the characters in intense situations that leave the reader on the edge of their seat. With lush descriptions, impactful character development, and powerful writing, this debut author will have you clamoring for more of her words.”
— Sarah Green, Vero Beach Book Center, Vero Beach, FL

A 2018 Most Anticipated Young Adult book from debut author Adrienne Young, Sky in the Deep is part Wonder Woman, part Vikings—and all heart.

Raised to be a warrior, seventeen-year-old Eelyn fights alongside her Aska clansmen in an ancient, rivalry against the Riki clan. Her life is brutal but simple: fight and survive. Until the day she sees the impossible on the battlefield—her brother, fighting with the enemy—the brother she watched die five years ago.

Faced with her brother's betrayal, she must survive the winter in the mountains with the Riki, in a village where every neighbor is an enemy, every battle scar possibly one she delivered. But when the Riki village is raided by a ruthless clan thought to be a legend, Eelyn is even more desperate to get back to her beloved family.

She is given no choice but to trust Fiske, her brother’s friend, who sees her as a threat. They must do the impossible: unite the clans to fight together, or risk being slaughtered one by one. Driven by a love for her clan and her growing love for Fiske, Eelyn must confront her own definition of loyalty and family while daring to put her faith in the people she’s spent her life hating.

Adrienne Young is a foodie with a deep love of history and travel and a shameless addiction to coffee. When she’s not writing, you can find her on her yoga mat, sipping wine over long dinners or disappearing into her favorite art museums. She lives with her documentary filmmaker husband and their four little wildlings in the Blue Ridge Mountains of North Carolina. She is the author of the New York Times bestselling Sky in the Deep duology and the Fable duology.

"A rousing saga and moving coming-of-age tale, perfect for those who appreciate the wild and the wildlings, strong female protagonists, and cinematic battles." - Kirkus, Starred Review

"Drawing on Viking history and lore, debut author Young crafts an exciting, at times heart-wrenching story centered around 17-year-old Eelyn, her Aska clan, and their centuries-old war with the Riki...Young’s often poetic writing forms a stark juxtaposition with her vivid descriptions of battle and bloodshed, creating a clear picture of the brutality of war." - Publishers Weekly

"Young’s brutal, emotional debut is set in a land that is as unforgiving as its people. The strongest aspect of Young’s work is the world building; she packs it with details that viscerally pull the reader into Eelyn’s world. Young has also populated this world with complicated characters who evolve as readers get to know them. Even better, the theme at the core of the story—overcoming prejudice and unifying to fight a greater threat—resonates with current real-world issues. With its gorgeous prose and epic battle scenes, fantasy lovers will be easily satisfied." - Booklist

"Viking history aficionados as well as fans of Sarah J. Maas’ Throne of Glass series will fall in love with this richly crafted world. In particular, readers will respond to Eelyn, who is as emotionally passionate as she is physically capable. Young has built a detailed culture into Sky in the Deep in which her characters thrive. This intensely authentic story will appeal to adult readers as well as teens." - RT Reviews, 4 ½ stars Top Pick

"Eelyn is a relentlessly fierce warrior, and even her romance with a Riki fighter doesn’t quite soften her; indeed, the two find that their lust for blood is almost as strong as their lust for each other... The action on the battlefield and the rising political tensions between the clans will easily keep readers involved through the final page." - The Bulletin of the Center for Children's Books

"A refreshing tale where life is tested and people have to overcome their differences to fight a bigger foe to survive. A fast-paced, action-filled fantasy for all YA collections." - School Library Journal