When America Stopped Being Great: A History of the Present (Hardcover) 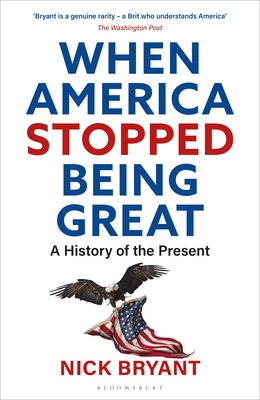 'Nick Bryant is brilliant. He has a way of showing you what you've been missing from the whole story whilst never leaving you feeling stupid.' – Emily Maitlis

'Bryant is a genuine rarity, a Brit who understands America' – Washington Post

In When America Stopped Being Great, veteran reporter and BBC New York correspondent Nick Bryant reveals how America's decline paved the way for Donald Trump's rise, sowing division and leaving the country vulnerable to its greatest challenge of the modern era.

Deftly sifting through almost four decades of American history, from post-Cold War optimism, through the scandal-wracked nineties and into the new millennium, Bryant unpacks the mistakes of past administrations, from Ronald Reagan's 'celebrity presidency' to Barack Obama's failure to adequately address income and racial inequality. He explains how the historical clues, unseen by many (including the media) paved the way for an outsider to take power and a country to slide towards disaster. As Bryant writes, 'rather than being an aberration, Trump's presidency marked the culmination of so much of what had been going wrong in the United States for decades – economically, racially, politically, culturally, technologically and constitutionally.'

A personal elegy for an America lost, unafraid to criticise actors on both sides of the political divide, When America Stopped Being Great takes the long view, combining engaging storytelling with recent history to show how the country moved from the optimism of Reagan's 'Morning in America' to the darkness of Trump's 'American Carnage'. It concludes with some of the most dramatic events in recent memory, in an America torn apart by a bitterly polarised election, racial division, the national catastrophe of the coronavirus and the threat to US democracy evidenced by the storming of Capitol Hill.

Nick Bryant is one of the BBC's most trusted and senior foreign correspondents. He has been posted in Washington, South Asia, Australia and, most recently, New York. Nick studied history at Cambridge and has a doctorate in American politics from Oxford. He now lives in New York from where he reports on America for the BBC.

"A scathing indictment of the polarization and degradation that has transformed the US … [A]n adroit political critique." - Kirkus Reviews

"Bryant is a genuine rarity, a Brit who understands America" - Washington Post

"Few outsiders explain America better than Nick Bryant or write about it as well. This is a must-read guide to an extraordinary time" - Katty Kay

"A masterclass from an outstanding chronicler of modern America ... Insightful, thoughtful, and beautifully written." - Orla Guerin

"Nick Bryant is brilliant. He has a way of showing you what you’ve been missing from the whole story whilst never leaving you feeling stupid." - Emily Maitlis

"An absolutely belting achievement ... An elegy for a lost nation and a lost cause." - Justin Webb

"There are all too many people who can opine about the United States but there are very few with Nick Bryant’s depth of knowledge, experience and empathy for the country and his ability to communicate intelligently, engagingly and entertainingly." - Nick Robinson

"[Bryant] has a deeper understanding than many of the ebb and flow of history ... [His] breezy prose displays a keen eye for good quotations and telling anecdotes." - TLS