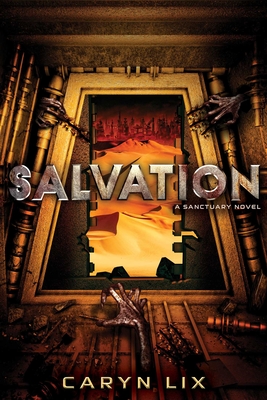 When Kenzie and her friends find themselves trapped on a strange planet, they must risk everything to save themselves and Earth in this thrilling final book in the Sanctuary trilogy.

Fall down seven times, get up eight.

These are the words Kenzie has always lived by. The problem is, she’s fallen down too many times to count.

Kenzie and her friends have already escaped two vicious alien attacks—not to mention the corporate bounty hunters sent to capture them. They’re haunted by the friends they’ve lost and the hard choices they’ve had to make in this war they never asked for.

And now, thanks to superpowers she received from the very aliens she’s fighting, Kenzie has stranded everyone on a strange planet with no way off. She just wanted a safe place from the monstrous creatures terrorizing her world, but this new planet has dangers of its own, and Kenzie must uncover its secrets if she has any hope of ever making it home again.

Sacrifice is nothing new for Kenzie. She’ll do anything—anything—to destroy the aliens that killed both of her parents. But how can Kenzie save Earth if she can’t even save the people she loves?

Caryn Lix has been writing since she was a teenager and delved deep into science fiction, fantasy, and the uncanny while working on her master’s in English literature. Caryn writes novels for teens and anyone else who likes a bit of the bizarre to mess up their day. When not writing, Caryn spends her time obsessively consuming other people’s stories, plotting travel adventures, and exploring artistic endeavors. She lives with her husband and a horde of surly and entitled animals in southern Alberta. Find out more at CarynLix.com.